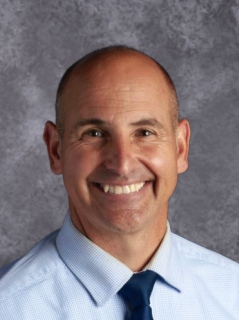 Vincent Riccobene has always been intrigued with the Lynden community. And now the new principal of Lynden Middle School is excited to be a part of it.

“Our family is just absolutely thrilled to be part of the Lynden community,” he says. “For me, I can’t wait to start to connect with students, staff and families.”

Current LMS principal Molly Mitchell-Mumma has taken a position within Lynden Schools as the new director of human resources and academic services, leading the district to open a search for a new LMS principal. Three finalists for the position were recently named and input from the LMS community led, in part, to the selection of Riccobene as the new principal for the 2022-23 school year.

“Mr. Ricco,” as he’s known, comes to Lynden with over 25 years of experience as an educator. He has filled a variety of positions, most recently as the principal of Olympic Peninsula Academy & Dungeness Virtual School with the Sequim School District. Prior to his current role, he served 16 years as an elementary principal, executive director of teaching and learning and middle school principal with Sequim. Riccobene began his educational career as a paraeducator, then classroom teacher, all following his service in Desert Storm as part of the United States Marine Corps.

Riccobene says that while he’s been part of the learning community in Sequim for decades, he’s excited to get to know a new community in Lynden, especially after knowing so many who spoke highly of the community. “I have always believed that the middle school age is an opportunity to have the greatest impact on students and their hopes and dreams for the future,” he says. “I personally believe you can increase the opportunity of kids graduating with the interventions and support you create at the middle level.”

Middle school was a time that really changed the direction of his life personally, thanks to an educator. “So, I have always been passionate about giving back to others what was given to me,” Riccobene says. “Middle school is the ultimate in-between time, but I think it is the ultimate time of importance as well. The students have an incredible amount of enthusiasm, energy and passion.”

Riccobene will move to Lynden with his wife, Dena, a long-time elementary educator and their daughter Gianna, a current freshman in high school. The couple also has two sons, one living in Olympia and the other graduating from high school this spring with plans to join the Marine Corps.

“We had a tremendous slate of applicants for the position, and the involvement from the school community in helping guide and select the school’s next leader was crucial to our process,” says David VanderYacht, Lynden’s assistant superintendent and next year’s superintendent. “We are excited to welcome Vince to our leadership team as we aim to serve students in Lynden by ensuring every student is known by name, strength and need.”