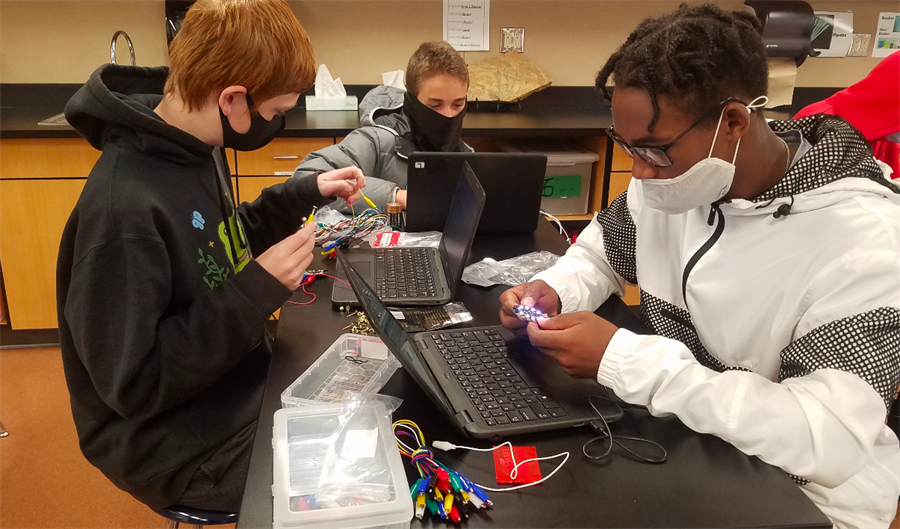 From building rockets to robots or testing cloth to water samples, the STEM (Science, Technology, Engineering, Math) opportunities at Lynden Middle School took an upswing for the 2021-22 school year.

Now with STEM an elective for both seventh and eighth graders, teachers Sue Brooks and Dan Cichowski have started exploring STEM alongside their students. “What I try to do is figure out what student interests are and tailor the course around some of those interests,” Cichowski says. “For my course this year, I’m trying to look at data to inform decisions.”

Brooks says she’s started with the same basic principle, allowing her students to have plenty of say in the process, all while they’ve explored the scientific method.

“Being able to tailor it to the kids is pretty neat,” Cichowski says. A byproduct of the pandemic is that every LMS student now has access to a laptop, which has opened new avenues in STEM and has led to a higher level of engagement within his classes, including STEM. Having moved into the new middle school, both teachers say the ability of the classrooms—from storage to power capabilities—opens entirely new worlds.

But it is more than the research on computers that has students diving into new areas of interest. An early project in Cichowski’s seventh grade class had them testing facemask design and quantifying how breathable or waterproof a certain cloth was. In that project, students were making their own tests to gather data, using C)2 readers they linked to their phones via Bluetooth to breathe through a straw to measure and determine how breathable certain cloth fabrics were. “They came up with that idea on their own,” he says, “which is pretty neat.”

Brooks says she gave students the freedom of choice in an early project of testing a consumer product. From paper towels to candles to bananas, students took their own approach to studying the scientific method. “Everybody was totally engaged and doing their thing,” Brooks says.

With LMS split into trimesters, the STEM course is open to all students, but also serves a need for the highly capable offerings. By having a new set of students for each trimester, expect the 2021-22 course to vary greatly across the school year. And that’s just fine with the teachers, even as they dream of going even deeper in STEM.

Cichowski says that he plans to let the students get into a range of areas, whether testing water quality in the area around their home or using flyfishing rods from Western Washington University to show the science behind fly fishing while studying materials and engineering. Brooks incorporates plenty of math into her science and looks forward to creating new micro-units for use within the STEM elective.

The classes often include lighthearted competitions, giving students a chance to test creations—such as a recent rubber band car build—against other groups. Having competitions allows the teams to see different ideas and motivates them to find new ways to improve projects. Plus, as Brooks says, it offers students the opportunity to “positively reinforce quality design.”