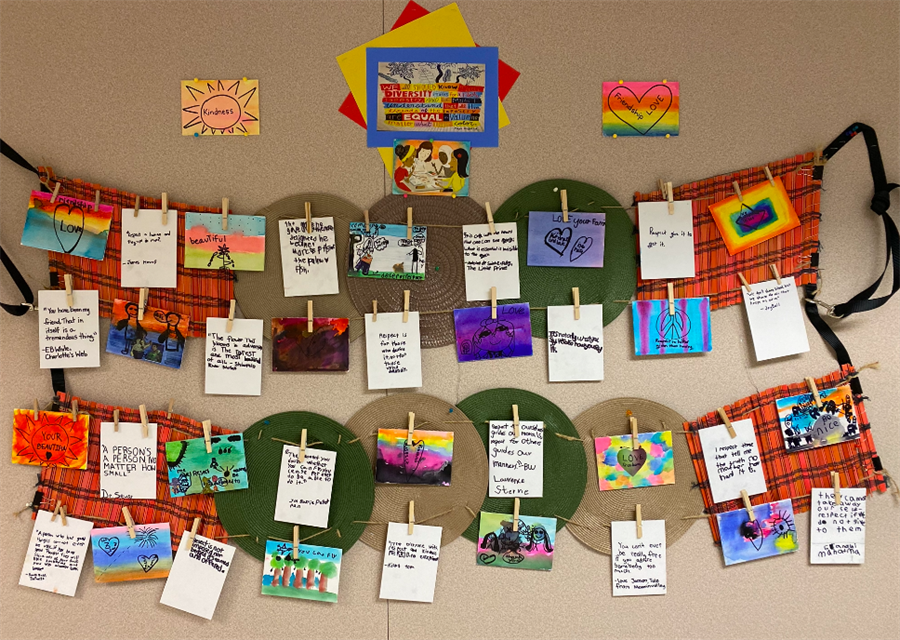 The January focus for students at Bernice Vossbeck Elementary centers on respect. As part of the Character Strong curriculum the school has incorporated all year, each month brings a different emphasis on a character trait. For January, Character Strong promotes respect and Marianne Hollander’s third-grade class has gone all in on respect.

Hollander’s class has created a display to encompass different ways to look at diversity and honor differences, incorporating varying art forms, quotes and creative styles along the way. The project also ties in the Martin Luther King, Jr. holiday.

“This display will be a representation of how we should love and respect ourselves and each other,” Hollander says. “Respect is simply ‘seeing the good in people and treating them with care.’ We live in a country with a diverse population of people. My hope is that in this display we will see how important it is to acknowledge, honor and respect our differences no matter what that may be.”

With all students involved in the project, the students were prompted to pick a quote about respect that was meaningful to them and incorporate that into their personal art piece. The artwork represents their individuality and their chosen quote.

Typically, Hollander makes the hallway display after everything is finished, but in this case, partnering with parent volunteer Sarah Stewart, the class worked together to assemble the display. Hollander hopes this strategy of them helping create the finished design helps give the project a more lasting impression.

“I want this next generation of kids to think about each other’s differences as something that doesn’t need to be seen or pointed out negatively, but respected, honored and celebrated,” she says. “I also want them to realize that those differences make our journey more interesting. They give us insight to new ideas and ways of thinking about things we fear.”

Hollander hopes that by incorporating quotes and art together, the project gives a foundation to showcase individual differences while celebrating each student’s creativity.

“As parents and teachers, we want the students to sue their uniquely creative ideas and artistic diversity to communicate the oft-neglected but highly essential message of respect,” Stewart says. “It’s our goal to provide them with the vehicle necessary to display the results of their creative endeavors, but not to control or stifle their individual perspectives. It is often through the works and words of children that the world begins to understand what it is they have been struggling to grasp all along.”