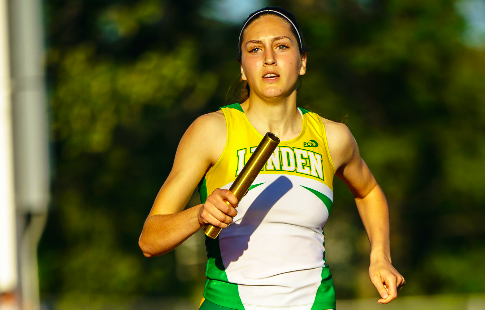 As Lynden Schools seniors saw their school year end prematurely, that included the loss of their final opportunity to participate in spring activities. This series recognizes the seniors across a variety of activities, with this post focusing on track and field.

Lynden track and field athletes put in long hours of hard work, but sprinkle in plenty of fun times together. The list of seniors who won’t be able to enjoy that final spring is long.

The two teams, boys and girls, were led by Isaiah Ellis and Savonne Sterk.

Ellis has been a core distance runner for Lynden, qualifying for the 2A State cross country meet three years and qualifying for the 2A state track and field meet in the 800-meter run, 1600-meter run and 4×400-meter relay. “Isaiah is an intense competitor who truly cares for his teammates,” says Layne Hutchins, Lynden track and field coach. “His passion and desire rub off on his teammates as he sets a high standard of the hard work it takes to consistently perform at a high level. His leadership has been a blessing to the team and the coaches.”

Ellis says he has loved competing for Lynden in both cross country and track, making “incredible lifelong friends” in both sports, while the sports helped make him a better person on and off the team. “All the coaches are incredible and have been great mentors to me as well as great friends that are willing to talk to me about anything,” he says. “This last season was supposed to be my greatest season. I was hoping to break a few records, but the situation we’re in changed that. I am still grateful for the opportunity I had to be an athlete the past four years and I can’t wait to help mentor some of the underclassmen and help them carry on the legacy we left behind.”

On the girls side, along with Sterk, seniors included Taryn Allison, Mari Mendoza, Katlyn Neff, Robin Scarlett and Makena Wauda.

Sterk has proven a key part of Lynden track and field since her freshman year. She finishes a three-year track career with five 2A State medals, including a State Championship in the 4×400-meter relay last season. “Savonne is one of the most caring, honest, straight-forward people I have had the pleasure of working with,” Hutchins says. “Her teammates love her because of how thoughtful she is, and she is a great example of an extremely hard worker who is humble and brings joy and smiles to her teammates and coaches.”

Competing at Lynden was something Sterk loved every step of the way. “The coaches are so invested in how you are as an athlete, but also as a person,” she says. “What they coach goes beyond sports.”

Sterks says she is disappointed about missing track her senior year. “I know most of us were training hard during the off-season and now we won’t know how far we could’ve gone,” she says. “I was pretty confident in our 4×400 team, thinking we were going to get the school record and do well at state again. I’m also going to miss all the traditions our team has and just seeing everyone at practice every day and playing Spikeball or getting ice cream after practice.”

Having had her last high school day without even knowing it and missing the countdown to walking across the stage at graduation is a sad thought for Sterk, but she wishes “the best to all my teammates and classmates wherever they end up.”