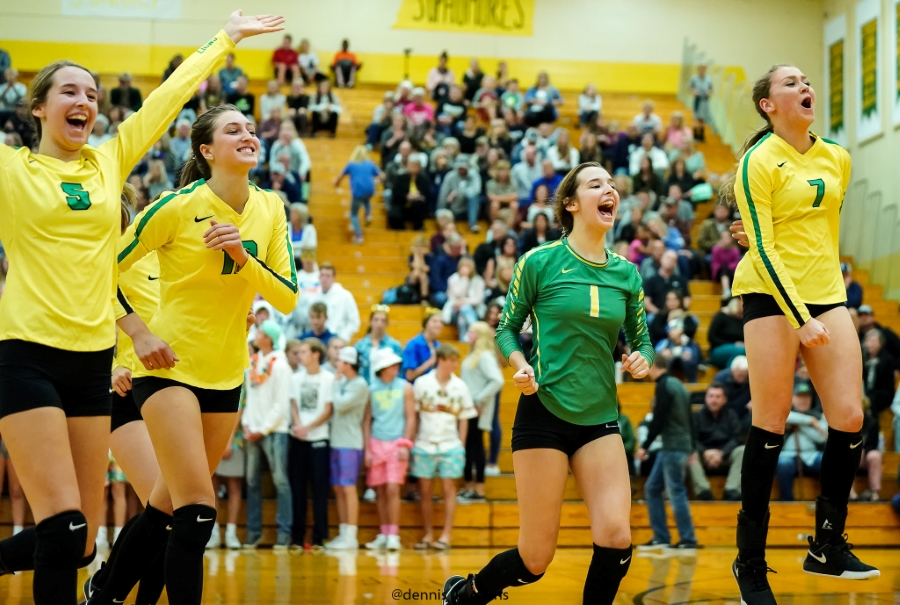 Participation in Lynden sports about more than championships

Lynden Schools has a storied tradition of performance success. The banners hanging in the Jake Maberry Gymnasium show state titles stretching over decades, from football to golf and basketball to tennis, to name just a few. But those banners aren’t the reason Lynden Schools and its dozens of head, assistant and volunteer coaches dedicate hours of time to teaching about life through sport.

“Playing sports is not easy; life is not easy,” says Blake VanDalen, LHS teacher and head football coach. “I feel sports is the number-one way kids can learn how to handle adversity and create grit or toughness to persevere when things don’t go your way.”

At Lynden, the number of students exposed to the life lessons of sports is impressive. At the high school, using the most recent numbers available for each sport, 613 students participated in athletics over a single school year. Lynden Middle School saw another 441 students participate.

“Sports feels more important now than it ever has based on a number of things out there for kids to do that aren’t positive,” says Mike McKee, athletic director. “There are some awesome things, but there are more distractions and things that take you down a not-great path. A positive use of time and ability to create positive habits through sports, such as teamwork, sportsmanship and learning to play well together through discipline and fighting through adversity, those are all really positive things to do with your time.”

McKee says the goal is to reach as many kids as possible in the school district by making a direct connection between the school and adults to the students. “We have a lot of really, really qualified coaches, good coaches who genuinely care about kids,” he says.

Lynden, similar to other districts around the state, have a mix of no-cut sports and sports that require cutting students because of available space and teams. VanDalen, who also coaches basketball, says having to cut a kid is the most difficult thing he has ever done as a coach and that is one thing he loves about football, the most participated-in sport in the district with nearly 100 students each fall season.

“In football, we can find a role for every kid who comes out to play and they get to be part of a team and our approach is always about what makes the team the best it can be and to do that we need everyone involved at whatever level they are at,” he says. “I could tell you several stories of first-time players who have had a huge impact on some of our state championship teams, whether a starting role, special teams or even a scout player in practice and back up on Friday nights. Everyone has an important role in football and that’s great for kids to know they won’t be cut and are valued.”

The other two sports at the high school with the next highest participation numbers, track and field and tennis, are also no-cut sports that draw a lot of students. The girls tennis team is the school’s second-largest sport and the boys track team is a close third. Then a mixture of other sports, from both girls and boy soccer, girls track, boys tennis, boys basketball and baseball fall in the next wave of sports highly participated in at the high school. The top sport for participation at the middle school is track, with volleyball, football and cross country right behind.

“A no-cut sports like track and field — and cross country — provides an equal opportunity to every person to explore their athletic ability,” says high school track and field and cross country coach and high school teacher Layne Hutchins. “Track and field is completely measurable, which means that every athlete can work hard and compare with their past marks to hopefully improve. It doesn’t matter if they finish first or last, they can grow, persevere and see change. Having no cuts and playing time not determined by the coach allows every student-athlete the change to grow.”

In the track program, every improvement is recognized in a whole team meeting each week.

McKee says it isn’t simply that sports like football, track and tennis don’t cut that brings the high numbers, but also the coaches, whether VanDalen, Hutchins or boys and girls tennis coach Trey Ballard, also a teacher at the middle school. “You get someone like a Layne Hutchins,” McKee says, that is why we have so many kids out, not just because they love to run, but because they have a good connection with Layne working hard and building connections. We have that in a lot of those types of sports and it makes it very healthy.”

With such a diversity in sports offerings, McKee says it only serves to bolster numbers of students participating. Just look at the spring, where boys track and girls tennis, two of the most participated-in sports happen at the same type.

The life lessons don’t end with overcoming adversity. VanDalen says students learn about time management and notes studies shows student involved in two or more sports or activities do better in school because not only do they have to maintain grades to participate, but they also become more efficient and organized with their time, another lesson that serves a student well in life after high school.

“They also learn camaraderie and true bond and trust with others,” VanDalen says. “Each season is a very special experience and journey for our kids.”

Coaches across the district strive to teach by words and example. While it may look different for the variety of sports and coaching personalities, they all put in that effort by sacrificing hours on weekends, nights and summers to help students improve and learn while spending the season dedicated to doing the best they can, all while supporting students across a range of sports. That’s why you see spring-sport coaches attending fall sports to support students and also high school athletes serving lunch at elementary schools in the district to inspire young students.

“We win and lose with class,” VanDalen says. “We want kids to walk off the field saying, ‘I wish I played for Lynden.’ We play hard, but we don’t disrespect our opponent in any way. Basically, I think football is the greatest way I know to help kids be successful in life. It’s hard, just like life, they have to work consistently hard for long periods of time and there is accountability for actions both good and bad. I think our players are more prepared to be successful, positive citizens having played football for Lynden.”

Hutchins says the goal setting involved in a sport like track proves plenty valuable. “Life rarely goes according to plan,” he says. “We have the chance to deal with setbacks and triumphs in an arena — sport — that in the grand scheme of things does not really matter. The personal growth that kids can gain provide important life lessons. The value of sport is the personal character that it can help build and those characteristics are a benefit to the community as a whole.”

That building of character, Hutchins says, is more important than wins and losses. “The desire to excel and to be your best, something you have passion about, can put you in a vulnerable place,” he says. “But this is the place we can see the biggest growth of character. So, we try to balance working hard and trying to win with the knowledge that the winning is not really that important in comparison to becoming a better person.”