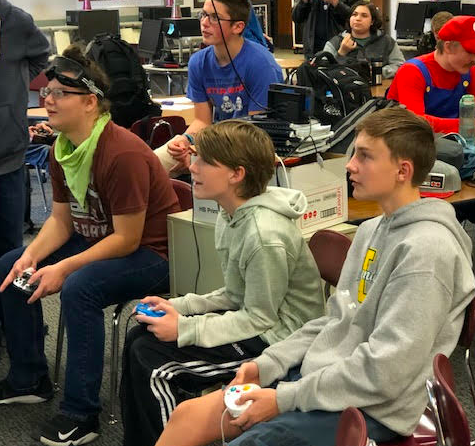 Esports club a growing connection between students, technology and community

On the last Thursday in October, dozens of Lynden High School students gathered in the classroom of Jody Bogues after school, along with four adult Be the One mentors, all eager for the esports club’s hour of practice before its first remote competition, this against Anacortes, as part of a six-week season.

Getting to this point, though, was thanks to the students, who launched the club last year and have continued to grow it. Now, on any given Wednesday activity period at the high school, as many as 60 or more students will show up to chat competitive video games and the Thursday after-school club meetings draws an active group of around 30 students.

“Personally, this is a passion project,” says junior Matthew Landis. “I always wanted to play something competitive and to bring competitive gaming to this school is a huge thing and being able to lead other schools to join us in that is something too.”

Junior Cole Fierst says that when they were younger, they all had a “pipe dream” of being able to play competitive esports in high school. “Now, being able to make it happen,” he says, “is really big and important to all of us.”

Bogues, as the group’s non-gaming advisor, says it has been fun for her to watch the group’s leadership growth. “This has been really phenomenal,” she says. “I had all these students when they were freshman and they were quiet and quirky and now they have presented in front of the school board and did an amazing job. They have developed a skill set not just in gaming, but in young men.”

The Lynden club started last year and participated in an Overwatch tournament at Sedro-Woolley High School by invitation. While the group’s ultimate goal is to create their own Overwatch team, they don’t have the technology funding to do so, as that requires 12 gaming PCs and the school has only one. So, instead, they have helped create an esports association regionally for the game Super Smash Bros. Ultimate, which includes Lynden, Anacortes, Sedro-Woolley, Burlington, Bellingham, Waterville and LaConner. The six-week regular season involves remote contests on Thursdays after school. The game, a party-style fighting game, is designed to be played with anyone.

The new association comes with a code of conduct for players and structured rules for each team, competition and season.

With esports a growing national phenomena — Ohio State University has a degree available in esports, professional teams are continually forming, stadiums are being built solely for esports, some of the largest sporting events in the world are now esports competitions and some of the largest professional sports prize money competitions now include esports — Bogues says it is great to see Lynden on the forefront of esports in Whatcom County.

Senior Austin Greenwood says that while not everyone enjoys the physical part of sports, there is still a group that loves competition. The esports group caters to that set.

The club’s members all have interests in plenty of competitive video games beyond just Super Smash Bros. Ultimate, so the club is about more than just one game and allows for those with a similar interest to interact. “We have a community right here people can get involved in and socialize, just like any club,” Fierst says.

“A lot of kids aren’t involved in community,” says sophomore Jacob Top. “Esports allows them to get involved in a community in the school.”

As the group grows, Fierst says the goal is to gain funding to buy computers so they can expand into additional games and host tournaments on site. Landis says they want to make that happen as soon as possible, but even if it isn’t when he’s still at Lynden, he hopes the club can continue its growth. “I have always wanted to make a change and now to hear that my little brother is hearing about the esports club from his elementary school is pretty amazing,” Landis says.

Just as Sedro-Woolley has been instrumental in supporting Lynden’s efforts to get the club off the ground, the group has put a focus not just on growing esports at Lynden, but also helping other schools in the area do the same. Lynden is on the forefront of esports in Whatcom County and it is on the efforts and leadership of the students.