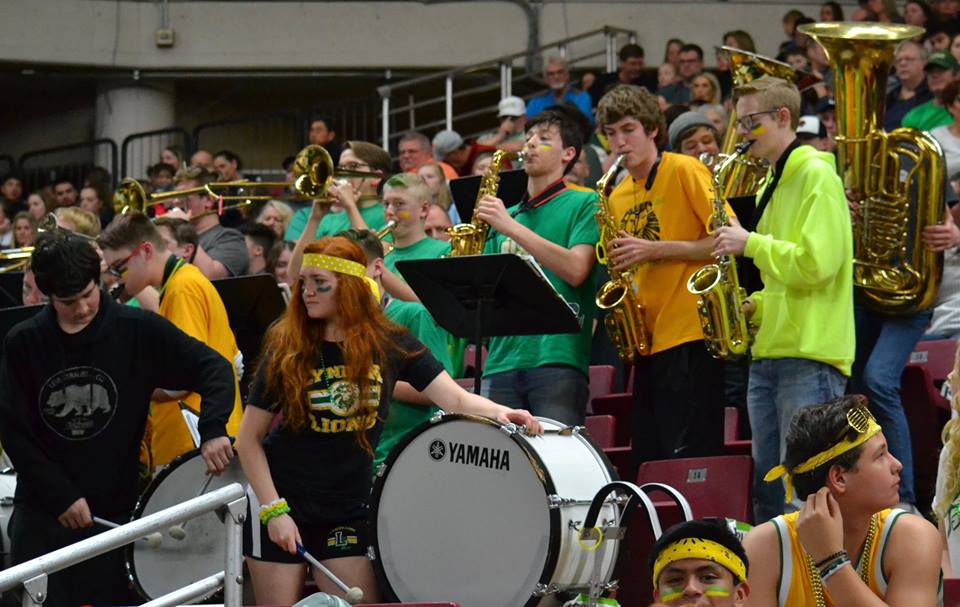 The Lynden High School band may be known for 28 straight years of earning a Superior rating from the San Juan Music Educators Association, and while an impressive feat, music at Lynden Schools is about so much more than excellent performance. It is also about creating opportunity.

“As a teacher, you want them to learn the music, but for the kids there is also a sense of community,” says second-year band teacher Trevor Galligan. “They’re a tight-knit group, creating friends.” Galligan equated band to a cross country team, a bonded group that works together and works not just on their craft, whether sport or music, but also together throughout the school day. “It becomes their crew,” he says. “I want the music classroom to be that safe space to make friends, make connections as well as learn the music. It creates that idea that you don’t have to do school by yourself.”

The instrumental classes include freshman band, band, pep band and jazz band. The main band is the one known for its Superior rating, which comes from a judged festival every March. During this event, the Lynden band performs and is scored by judges over five categories. Judges look at such things as balance and blend to ensure the correct part so the songs are heard at the right times, intonation to hear how in tune the band is and also playing technique. “The idea is to judge how much you are actually mastering the music versus just playing it,” Galligan says.

Lynden students take this seriously. “The first concert they are shaking off the rust and it goes okay, but you can see the switch turn on when we start prepping for that one,” Galligan says. “That is the one that means the most, it is the reputation of the group.”

The band is also in a travel year, meaning they will perform — and have a bit of fun — during a competition in April in California.

Along with the full band, Lynden features a jazz band which often represents the music programs in places around the community as the smaller group of about 14 students is able to perform at various locations. “The jazz band is that go-to traveling group because it is smaller and they are able to pack up and go,” Galligan says.

The pep band is a class at Lynden, but also a band that performs at football and basketball games throughout the year. Galligan opens up the games to any member of the band, not just those in the pep band class, meaning he has had as many as 75 students performing at a home Lynden football game. Expect to see large groups of students at various boys and girls basketball games over the winter and again in Yakima for the 2A state basketball championship tournament, if either one of the two varsity basketball teams qualifies.

Galligan offers the two non-instrumental classes. Music theory, often for those serious about music, invites driven students to a precursor to what they’ll see in college. This “textbook side of music” style class is the understanding of how music works. “The theory side offers that deeper understanding of music that correlates to every genre,” he says. “It is not just classical, but to have a grasp on music theory you understand how all music works.”

For digital music production, Galligan sees an entirely different set of students, all focused in a computer lab learning the basics of music recording, production, balancing and even commercial soundtracks. “They are getting a preview of what it would be like to do that in the actual workforce,” he says. “It is maybe for kids who don’t play an instrument. Basically, it increases student opportunity and creates every outlet possible for kids to play music or be a part of it.”

That inclusion, Galligan says, is why they’ve seen an increase in interest in pep band, for example, along with these new non-instrumental courses. “A lot of these kids don’t get to go on field trips and aren’t in sports, so they don’t feel like they are part of a team atmosphere,” he says. “I am trying to bring the pep band to every possible thing to give them the team aspect of things.”

With digital music, Galligan brings music to students who wouldn’t normally experience it, with the digital class generally the only music class those students are taking in high school.

Moving forward, Galligan not only is excited about the courses, the student participation, but also the opportunity. The district has committed to modernizing the band program, replacing broken equipment over the next three years so students have quality instruments and equipment. “My kids are definitely excited,” he says. “We have an administration that sees the importance of music and helping us out.”