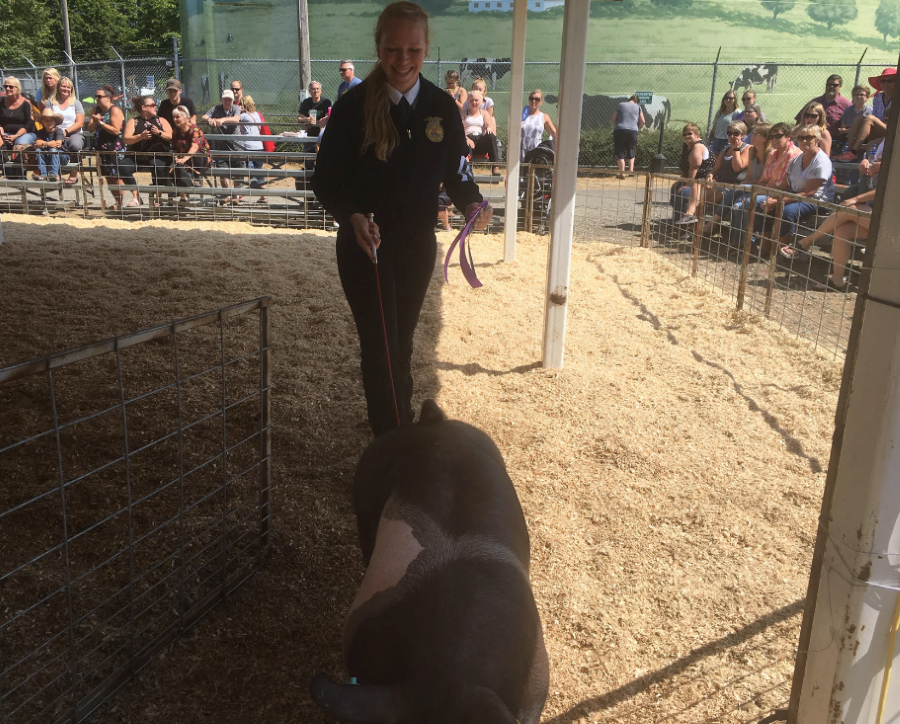 For the thousands of visitors pouring into Lynden’s Northwest Washington Fair each August, the sights and sounds come aplenty. For about 50 Lynden High School FFA students, though, the focus remains squarely on the job at hand.

As is tradition, Lynden FFA students join together to show pigs (by far the most popular for the students), sheep, beef cows and dairy cows during the six-day event. But prepping for that six days takes about six months.

John Grubbs, LHS teacher and FFA advisor, says each student showing an animal at the fair, dubbed a “project,” has their own animal and can house them at the FFA Barn on the LHS property, if they choose. The weeklong fair event includes showing the animals for judging, being available to answer questions to the public strolling through the barns and also securing support from local businesses looking to purchase the animals during the Livestock Market auction every Friday of the fair.

Everything, though, starts in the spring.

Students start small with, for example, pigs coming in as light as 40 to 50 pounds. Students can purchase their pig on their own or through a draft held in April hosted by the LHS FFA, a “fun event” that has students trying to figure out the best pig for them.

“I go a week before and look at the pigs to figure out which one I want,” says LHS sophomore Haley Biemold. “But I don’t know the draft order.”

With animals secured in the spring, the work gets going for the students, raising and caring for animals. Grubbs says pigs generally need to gain about 200 pounds in time for the fair, bringing their overall weight into the mid-200-pound range.

To get there, students have barn responsibilities, from feeding to cleaning. Junior Marissa Munkres says that when her pig was smaller it required more time to take care of it at the barn, but as they get bigger the job turns more to simply feeding and cleaning.

Munkres, who showed a pig for the second year, says one of the harder parts of the job was going to local businesses to ask for support during the auction. “That was quite a bit of work and they can say no, which is okay,” she says. Even still, she was confident heading into the auction before the fair.

For Biemold, who showed through FFA for the second time, starting as an incoming freshman, as young as Lynden allows, going to local businesses is an enjoyable part of the process. “It is kind of fun to go talk to local businesses and get to meet new people,” she says. “Then you see them at the fair and you already know them.”

Grubbs says that the students use the money raised from the livestock auction to pay for the next year’s project or put it toward a college fund.

Continuing the process year to year breeds confidence for the students. “It helped a lot (to have one year already done), especially with showing, which was hard to figure out,” Biemold says.

Biemold, who as a youth also showed lambs, goats and cows has found her sweet spot, as many in Lynden FFA have. “Pigs,” she says. “are my favorite.”