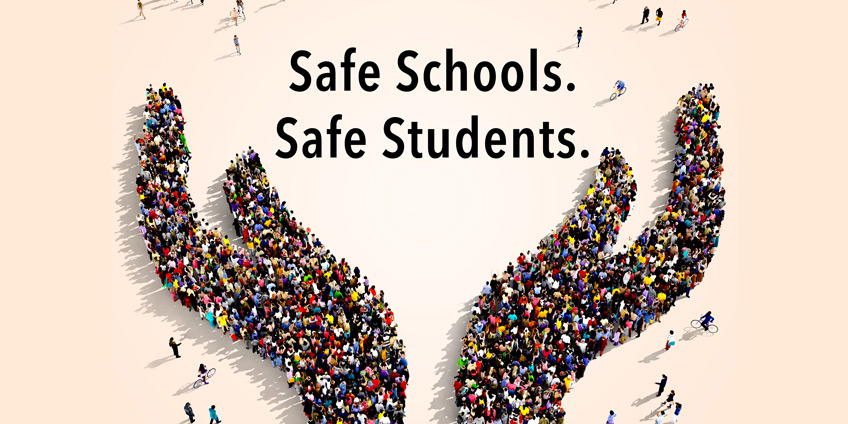 As part of the recent bond passage, Lynden was able to not only build two new school buildings — Fisher and Lynden Middle — with the latest in security built in, but allocate funds for retrofit upgrades to three other schools: Lynden High, Bernice Vossbeck and Isom. Combine the physical upgrades with cooperative work with the Lynden Police Department, Safe in Schools, Lynden Schools’ Family Community Services staff and more and Lynden Schools continues its push to ensure student safety.

All five of the Lynden Schools main campus buildings now have locked single-entry entrances during the day, says David VanderYacht, assistant superintendent. As a visitor approaches the main campus door, before they can enter the building they use a new video intercome system. The process requires visitors to identify themselves and state the purpose of their visit. Once inside, the visitor must sign in and wear a visitor’s badge.

Main doors throughout the buildings have also been upgraded with automated locks. In the event, VanderYacht says, they are unlocked and need to be locked suddenly, each office has a lock-down button that can lock key doors instantly. The one-push button also results in a call to 911. The upgrades, paid for with bond funds made available through cost-savings on the LMS project, were approximately $90,000.

“We have made a significant investment, using bond funds, to upgrade our surveillance systems, aligning our schools into one system and expanding our coverage,” VanderYacht says. A partnership at Lynden High School with the Whatcom County-based security provider, Security Solutions, and the national provider of the camera systems, Avigilon, allocated Lynden High a free upgrade to the top-of-the-line camera system. Using Lynden as a showcase school for what the security cameras are capable of, the new technology allows for pinpoint analyzation in real-time or in footage history, as well as extended coverage of all aspects of the campus.

Key district personnel have access to the system of each school, now all unified. Each school can record footage and save it for a pre-set amount of time and new cameras provide much fuller coverage of the five main campus buildings.

Both Fisher and Lynden Middle school used design to improve safety. Along with the above security measures, the designs of the new buildings were created in concert with law enforcement and current best practices in sightlines, vehicle access points, public entrances and automated door controls.

With physical components upgraded, Lynden Schools has also worked with staff and outside resources to ensure needed supports for students to feel safe in their school environment. The Youth Mental Health First Aid course is an eight-hour training specific to help adolescents experiencing a mental health or addiction challenge or crisis, says Tim Metz, the district’s special programs director. The eight-hour training was not only offered to staff — with a focus on middle and high school staff — but is being offered to the community. The district trained staff members this past summer to become instructors, allowing them to train other staff internally as part of a multi-year effort to improve district-wide response when a young person is experiencing some type of challenge or crisis in their life.

In an effort to support students in need, Lynden Schools has added a third staff member to its Family Community Services department. Along the way, each of the main five campus buildings also has a dedicated nurse or nurse assistant. “We want our community to know this is something we value and we are making sure there are health professionals available for all students,” Metz says. “It adds a nice level of support and safety for the schools.”

Lynden Schools has started a partnership with Safe and Civil Schools to help build and identify positive behavior interventions and supports for students. The effort has kicked off at Fisher Elementary with training to set up classrooms to encourage positive behavior and create schoolwide expectations.

Lynden Schools is full of tools and resources to support students in crisis, whether victims of bullying, students dealing with abuse or students showing signs of suicide ideation. Lynden has created a consistent response plan and levels of intervention. “If someone is concerned about a student, let us know,” Metz says. “We have a lot of tools and resources. Calling the school counselor is always recommended.”

School leaders throughout the Lynden community have teamed with city officials and the Lynden Police Department to develop a team working to respond to the safety and well-being of students. Leaders at Lynden Schools, Lynden Christian, Ebenezer and Cornerstone have all come together to create a partnership with Lynden Police to build emergency procedures that inform how schools respond to events, but also limit the impact of emergencies both in reducing the chaos and limiting injuries and harm. The partnerships have also formed relationships that will allow the schools to support one another in the event of an emergency.

The effort has led to tabletop exercises with the Whatcom County Sheriff’s Department of Emergency Management. During these events, school leaders learn what procedures they need to put into place to ensure that whether an earthquake or a “bad actor” they are doing the most they can to protect the safety of students and staff.

“We are working toward more full-scale exercises in which law and fire and schools can all work together to see whether their plans will play out the way they are intended in the event of an emergency,” VanderYacht says. “We can’t plan for everything, but the idea is that if we have a default plan that is known and understood, the calm parts of our brain can respond flexibly to the circumstances.”